Daily meetings are, not surprisingly, the most repetitive meeting you are having together with your team. It doesn´t matter whether you have been working with your team for years or just a few days: Daily stand-ups become routine. However, the presumed slickly Daily routine sometimes turns out to be an efficiency killer. Fifteen minutes, that can be highly efficient or a complete waste of time for everyone. Especially when forming new teams your first goal is to bring them up to speed and in a good working mode. You might hit the wall right here within your first days. The understanding of what a Daily is and what it comprises most likely differs from individual to individual. Hence it is crucial to clarify the structure of a Daily in the very first days. It will take some time and possibly needs adjustments from time to time until a common Daily mode is found. The positive thing about forming new teams though, is that every individual brings in another component and experience that helps to break the routine of the others. Everyone benefits!

Teams that are very well attuned to one another face another issue after a certain while. When being stuck in the very same mode over years habits creep in. Those habits can lead to inefficiency for example time overruns  when mainly technical stuff is discussed that´s not relevant for the whole team. In those cases I can highly recommend to reflect the Daily carefully and revise its structure if necessary.

Here are 4 recommendations how to break old structures and create new ones to run successful Daily stand-ups.

Keep it crisp! It´s a very simple rule, but you should stick to it. A Daily lasts 15 minutes max. Rather use the time efficient and do not get lost in technical discussions. Use the first 10 minutes to walk the board and go through the stories to provide an update. Take another 5 minutes to briefly talk about further topics e.g. open questions from the inbox (I´ll come to that later), absences like home office, sick calls or holidays, and engineer pairings.

After those 15 minutes the Product Owner can leave the Daily, whereas the engineers can continue with a another 10 minute tech huddle. The tech huddle is supposed to discuss specific technical questions that came up during the Daily and are worth to be clarified within the team. However, as it´s a developer talk the Product Owner usually doesn´t attend.

There are two common ways how to walk the board: either you go story by story or  you let each team member say their part one by one.

The first is probably the most practiced one. However, there are downsides to both of them. If you go story by story you certainly make sure that nothing will be left out or forgotten. What I often experienced though, is that some team members remain silent during the Daily. You have to actively ask them about their tasks of today or the achievements of yesterday. Another phenomenon is that those Daily meetings are often lead by the same people. That´s not what you want. Actually you want every team member to participate equally and foster contribution throughout the team. If you walk the board going around person by person you jump within the topics and stories. You get lost and confused.

So, my first recommendation is to create a sheet of paper with the “moderator of the day”. Draw a circle with each name placed on it (similar to a clock) and move a colored magnet each day to the moderator of the day. The rotation ensures that not only the Product Owner facilitates the Daily, but also every other person of the team. Do also include your UX Designer or other cross functional team members!

Secondly, rotate from person to person, but stick to one story lane. Walk the board from top to bottom and right to left. Let everyone explain briefly their tasks of that particular story. Then move to the next story and lane.  Ideally by end of the 15 minutes every developer gave at least one update. If someone remained silent whatsoever, approach him or her actively and ask about the tasks. It´s important for you as Product Manager to keep an eye on the capacity of the team, and have full transparency over its involvement and work load.

A well structured board helps you to make the most of the 15 minutes in addition to a good timing and involvement of the team. Of course you will have the usual columns on your board according to your teams´ needs. However, there are easy ways to add up to the standard Daily format. As briefly mentioned in part one, I appreciated the idea of an “Inbox” or “Think Tank”. This will be a separate part on your board e.g. nicely designed as a little mailbox. The mailbox is meant to be a collection of open questions, remarks or reminders that the team came up with during the day, that are not super urgent but should be addressed at the next Daily. Reserve 2 minutes during the Daily to check the inbox and pick up the stickies. The topics on the stickies should not be discussed within the 15 Daily minutes, rather address them and name someone who will take care of it e.g. agree on a chat afterwards or take it to the tech huddle.

Another time saving and efficient part on your Daily board should be the absence box. Place all team members here that will not be available during the week or for the next day(s). Use the according magnet of the person (see also point four) and move it to the box. You should cover all kind of absences including home office, sick days, workshops and trainings, vacation etc. It provides the whole team with a transparent overview of the availability of the others.

My last extremely simple but effective recommendation is to use magnets for each team member. You can either create avatars, photos or write names on the magnets. Customized magnets can be ordered on the internet. If you need them quickly just do it yourself: print out the images and glue them on the magnets. There are many positive effects of personalized team magnets. First, transparency. Everyone can easily see at a glance who is working on which task within which story. If you work in developer pairs they are very helpful in order to identify the agreed pairings quickly. Second, you can use them to make WIP limits visible. If each team member gets a total count of e.g. three magnets, only three can be distributed on the board. As easy as that. Last but not least it has a very simple psychological function: commitment. If you are exposed to your image on a certain task that´s visible for everyone, you are more committed to it.

2. Walk the board from top to bottom, right to left and person to person

3. Appoint a moderator of the day

4. Use an “Inbox” and a particular part for absences

Need some inspiration? Check out the Product Stories Daily Scrum Board 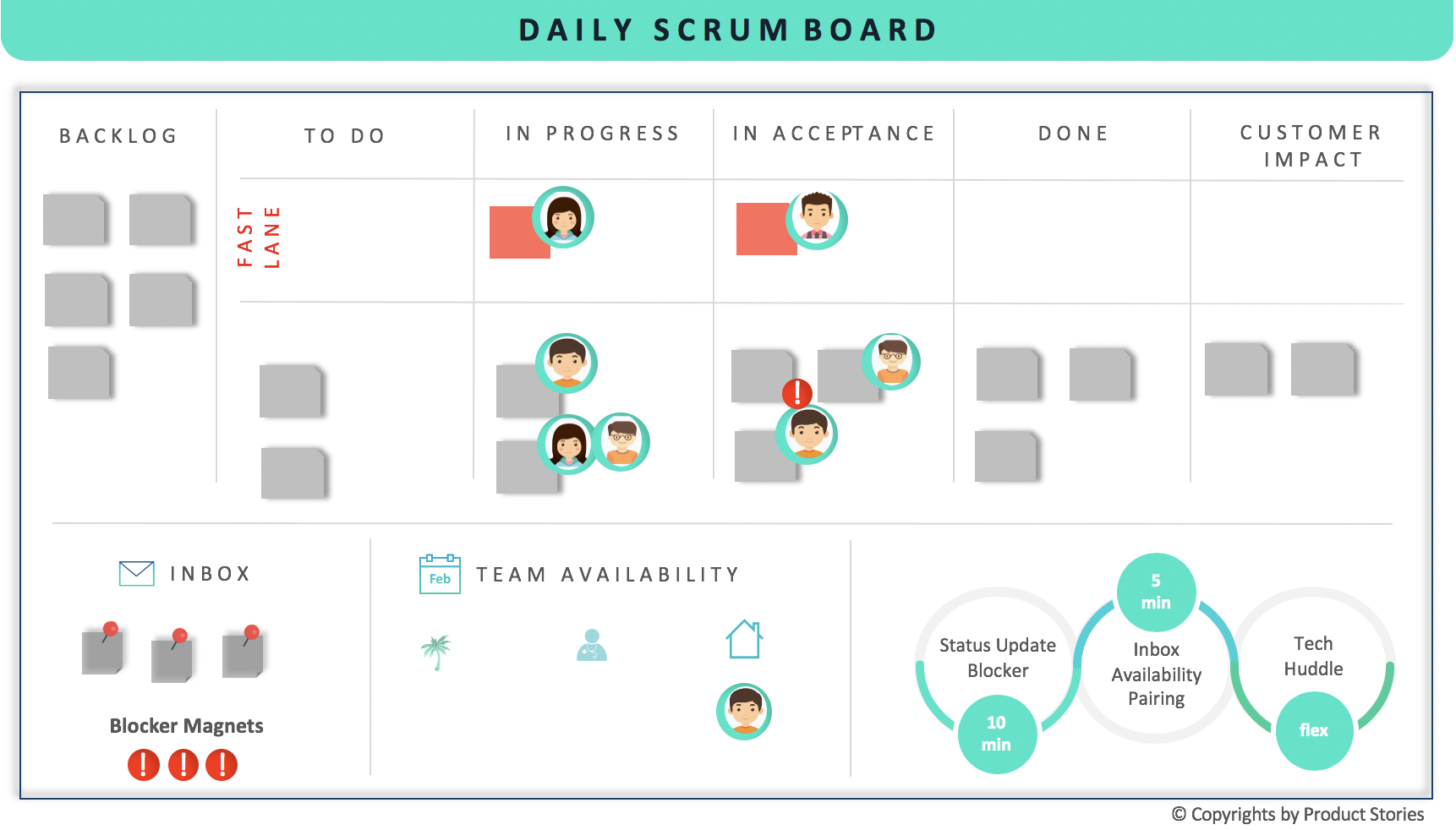 Use Blocker Magnets to illustrate stories that can´t be worked on e.g. due to unresolved issues.
Give your team the presence it deserves. Personal images increase appreciation and team commitment.
The Fastlane is reserved for tasks with high urgency e.g. bugs, legal requirement changes, and should be worked on with high priority.
This section gives a transparent overview of the teams´ availability: who is on vacation, works from home office or is sick?
Stick to an agenda and keep the time!
Keep track about the impact you achieved for your customers. You can also place your success metrics, objectives or key results here.

We use cookies to ensure that we give you the best experience on our website. If you continue to use this site we will assume that you are happy with it.OkRead more